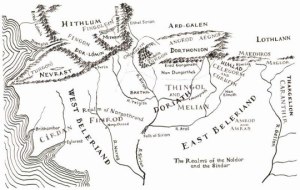 World-building techniques have always fascinated me.  High Fantasy and Epic Fantasy books were my delight as a young reader.  I poured over the maps on the book’s end papers, studied every entry in the glossary in the back, even marveled over the lengthy character name lists in the front.

When it comes to creating fantasy worlds for my own fiction, I’m a writer who knows the details of the characters’ environment. I must have their vitae close at hand so I know them well enough to write about their struggles.  It also doesn’t hurt to speak their language and follow the latest fads for their clothing styles.

Today I’m sharing 2 of my 6 must-have elements for defining fantasy worlds.  There’s no significance to the order I present them here, other than I’m starting with the largest elements and working down to the most detailed.

I love maps.  I can read a fantasy map and envision the journey on foot, horseback, or coach from one place to another.  The names of cities, mountain ranges, and farming communities reveal details of the characters’ struggle to control their environment by naming the elements around them.  Detailed maps of towns are rich with information on street names, how crowded the buildings are, and where to go for a bite to eat.

A Map Gives You the Key to Your Fantasy World

I make two maps as I create a fantasy world.  One map shows the largest continent view of the world, the other is a detailed view of the town where the characters’ interact with each other.

This approach anchors the story in a “real” place. It also provides ready-made names of geographical features for the characters to use.

The people and sentient creatures of a fantasy world interact with each other according to the history and current rules of their political and social systems.  The political system can include: caste, monarchy versus commoners, clergy versus secular, or military versus civilian.  Other political systems may include the world’s magic structure (more on this in a later post).  In the Wrath and Tredan’s Bane magical world of Sye, the political struggle of the Enchanters versus the Church is the primary conflict.

There is Always Someone Opposing Your Fantasy People

Social systems include:  men versus women, humans versus sentient creatures, magicians versus non-magic workers, conflict between guilds, rich versus poor, or single versus married persons.  Notice I present the political and social systems as conflicts.  The people in the fantasy world belong to a group, even if it’s the group of outcasts.  There’s always someone else opposing your fantasy people–otherwise your chronicles of their activities is a bland non-story.

To define the political and social systems of my fantasy worlds, I write a few pages of narrative describing these systems, their history, and the conflicts within these systems playing major parts in the story.  Very little of this narrative ever makes it into the novel directly (it would be a BORING information dump that’s a no-no for fantasy authors).  I consider my ramblings about the political and social minutiae a reference paper, or perhaps a historian’s scribbled notes.

In my next post, I’ll explain why meat and grog are wimpy, and how to speak in tongues.