It is a Victorian-styled world with alternative technology gadgets powered by steam engines.

For all the curious ones who want to take a look, just follow me. First, go watch Lita’s Steampunk London video, then come right back.

In the alternate world of Steampunk London, the air is smoky from the coal-burning steam engines. The soot covers the sun. This alternate city is an ever-misty, gritty place where locomotive whistles from the train yards mingle with the hiss of steam-propelled horseless carriages. 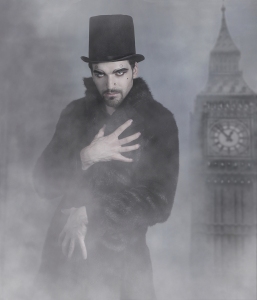 This world has cobblestone streets and clever gadgets galore. A gentleman might carry a pistol-sized steam cannon while the ladies protect themselves with steam whistles to startle (and deafen) attackers. Mist from their steam-powered innards shroud street lights. Mad inventors may have clanking and gear-grinding metal homunculi follow them as they go about their business.

Gentlemen step out in tail coats, leather Hessian boots, and finish their attire with top hats. The hats could have access panels to a tiny coal-powered steam warmer for the wearer’s head on snowy days. The gentlemen wear shirts with ruffles or lace with a knotted cravat at the stand-up collar. Men’s clothing is refined and polished in the steampunk world, and more formal than today’s wear.

Some of the women are corset-clad under their always-stylish long dresses. They crown their immaculate coiffures with petite top hats made of silk and dainty machine gears polished until they shine like mirrors.

Other women might be mechanics and pilots at the zeppelin works. They wear utilitarian trowsers, silk pilot’s scarves, leather flight caps, and often have grease on their clothes, hands and faces.

Everyone has flight goggles dangling from their neck or tucked up out-of-the-way on their hats. Whether to protect their eyes from a spur of the moment zeppelin ride, or needing an attached magnifying loupe to fix one of their gadgets, both the men and women value practical items. Steampunk citizens adorn themselves with jewelry made from machine gears. Fashion for everyone is a mix of classy mid-1800s and grungy gear-look.

For Steampunk London, imagine a world where electricity did not become the universal power source we have today. Familiar gadgets instead run on steam. Home and office interiors have piped-in steam for appliances. Telephones use steam. Kitchen appliances plug-in to steam lines instead of electricity plugs. Recreation? Imagine a steam-powered “electric” guitar.

The Steampunk world has stripped away luxury facades and shows the underlying utilitarian trappings as beautiful and functional. Exposed steam pipes are works of art.

This world is a mad inventor’s dream where valves, gears, and copper piping are the ingredients for practical wonders ranging from penny farthing bicycles with steam rockets to hydraulic spiders with coal-fired boilers that can cover uneven terrain that is off-limits to locomotives. Did Lita say trains? Steam locomotives are an essential element of the Steampunk London fantasy world. 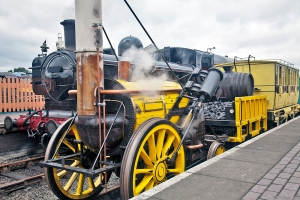 The old-fashioned steam locomotive is ubiquitous to Steampunk–it’s practically a character in its own right. Its howling whistle, the chug-thump of its wheels, even the oily gleam of its snout embody the practical strength of the steampunk world.

Steampunk London people, surroundings, and story lines are clever and crammed with well-dressed style. It has gritty elements borrowed from the Film Noir World, and shares trappings from another fantasy world, Steampunk Wierd West.