The Dramatis Personæ is the roster of conjurers and sentient magical creatures staying in the many rooms, grottos, and byways of Lita’s castle. Here is the guest book for the Clockpunk Wizard Wing.

Bright’s father is a Prince of the Elf Court, and his mother has the court title of Princess. Bright’s grandfather, Wolverhampton, is also an Elf Mage Prince of the Court.

Brownie, a dog and acquaintance of Go Fer.

Charon, Sir Death and patron of the World’s Library.

Copernicus, a clockworks homunculus and member of Kadmeion’s staff. 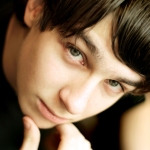 Furgo, a cynanthrope who before was a dog named Go Fer, and is now Kadmeion’s familiar. Furgo is a rare dog-to-human shapeshifter rescued by Wizard Kadmeion during a mandrake root extraction on Holcomb Island.

Furgo’s default form is a small black dog. He has a rarely used intermediate form of a brownie-sized fur-covered human.

Hissalumieon, a human and a member of Mevil Island monarchy.

Kadmeion, a human Wizard. Kadmeion is the only child of Wizard Trentworthy and Sorceress Dorian. His mother’s father, Haldemare, is also a wizard.

Kadmeion grew up on the floating island of Gogogogo, named after his family’s popular rest home for elderly magicians.

Morton, a human Wizard at Agatha University and Kadmeion’s mentor.

Nob, a wizard and member of Hissalumieon’s staff.

Ozomene, a clockworks homunculus and patron demon for the Harpies.

Philotes, a sorceress on Death’s Island.

Her younger brother is Chance Luck, and her family awaits the arrival of a second daughter. Probability also has a grandmother, Sorceress Amabel, who was the previous Lady Luck.