Where did Gentle Reader find the enchantments in Lita Burke’s fantasy worlds during 2014? Three is a magical number. Let’s take a look at the three most popular blog posts with new content that came out in 2014.

The most visited post released in 2014 is about one of the characters in Lita’s upcoming story, Glitter Ponies.

Burr, it’s wintertime outside of Lita’s castle here in the northern realms. Someone painted icy filigree on the windows. Let’s bundle up, go outside, and meet the artist. Say hello to handsome Jack Frost, winter’s fantasy boy. This magician embodies lacy window paintings, trees draped with sparkling snow, and crystalline sculptures made of ice. Read more in “Fantasy Boy of Winter: Jack Frost”

The second most visited post released in 2014 is one of Lita’s book reviews.

The Dark Days: End of the World – Episode 1 by Ginger Gelsheimer and Taylor Anderson is a YA thriller about teen Claudia Sheeplord and the end of the world via asteroid. Claudia has been skeptical about the blather over the past month about the killer asteroid that will slam into the Earth and raise the tides ten feet higher. Or two miles higher. Whatever. Read more in “Review: The Dark Days” 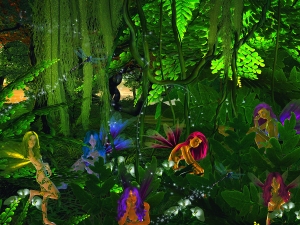 The third most visited post released in 2014 goes back to the Clockpunk Wizard world and talks about its most delightful denizens, the fey-folk fairies.

Meet Tinker Bell’s naughtier cousins—the fairies flitting about in the woodlands near Lita’s castle. These worldly fairies go with Kadmeion on his wizard-for-hire adventures. These wee magicians fly in, lavish their wizard with effervescent pixie dust, and give him spicy relationship advice. Read more in “Care of a Fey-Folk Fairy (Part 1)”

Next Time: Most Viewed Blog Pictures in 2014

1 thought on “Magic in Threes: Most Visited New Blog Posts in 2014”