Mateguas Island: A Novel of Terror and Suspense by Linda Watkins is a supernatural thriller about a family down on their luck who inherit a magic-filled malevolent house on an island off the coast of Maine.

The Twins Discover a Mysterious Box

Bill Andersen, his eight-year-old twin daughters, and his wife Karen move across the country after Bill loses his job in the California high-tech industry.

Bill’s aunt left them her house on Maine’s Mateguas Island. To Karen’s privileged eyes, the place is a run-down dump in a boring backwater.

For the girls, their great aunt’s house is creepy and holds secrets. The twins discover a mysterious box in their room that they keep hidden from their parents. Even when Bill finds a promising job on the nearby mainland, and Karen makes friends with the locals, things are not quite right with their new home. An odd-acting owl makes working in the yard unsettling. The worst part is that something unhealthy lurks in the swamp behind their house, and it is hungry for revenge—and worse.

Native American lore, mixed with an unusual haunting that possesses Bill and Karen to take uncharacteristic risks, makes Mateguas Island a dandy supernatural tale. Linda Watkins uses a deft hand in creating characters so real that they all but sit alongside and read aloud their scary story to you. 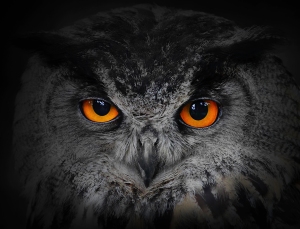 An Odd-Acting Owl Makes Working in the Yard Unsettling

The descriptions of island life create a perfect sense of the place. Lita heard the fishing boats rubbing against the docks and shivered from the chilly contempt of the yearlong residents’ regard of those ‘from away.’ Lita wanted to scold the twins for keeping secrets, tell Karen to stop being so selfish, and shake some sense into Bill. In other words, the story drew Lita into their scary little world.

Gentle Readers that enjoy a bit of adult misbehavior from characters caught by a force that eats the weak-willed, would love a visit to Mateguas Island. Just be sure to catch the last mainland ferry before dark. And stay away from the swamp.

Mateguas Island on Amazon US