Lita takes Gentle Reader to the land of Clockpunk Wizard today, with an excerpt from Old Bony Blue Eyes.

Wizard Kadmeion, Sir Bright, and the three fairies are on their airship and following a string of floating water globes called The Water Pearls to Sir Death’s island at the edge of their plate-shaped ocean world. A mermaid has taken a ride inside a large Water Pearl. Her globe has tangled in the airship’s rigging. Bright has just rescued their three fairies from the mermaid’s glamour spell. She is ravenous for magic, and tried to eat the fey-folk. Kadmeion has just climbed up to join them on the cabin roof. The mermaid tries her spell again, but this time focuses it on the young, magic-rich wizard. 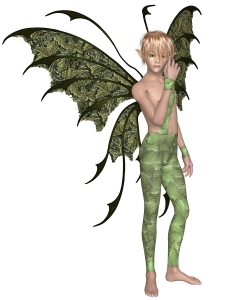 “Stop it, Madam Mermaid,” Kadmeion said. “Your trick will not work on me.”

Her glamour spell trickled away. This mermaid was a colorless, almost translucent being. She turned around once in her bubble, tried unsuccessfully to push her Water Pearl away from its mooring to the cabin roof, then curled into a waiting stance.

“Will you hold my hand, Sir Wizard?”

“You would surely bite me if I allowed that.”

“Will you hold my hand, Sir Wizard?”

“Is that why mermaids savage wizards who fall into the sea?”

“Magic too long denied has made us greedy.” She brushed away her floating cloud of white hair and gave it an impatient glance.

If you want to woo her cooperation, Kadmeion, try a spell to play with her hair, Bright mind spoke.

Bright’s suggestion earned him a glance and a nod from the wizard. Kadmeion turned back to the fussing mermaid and sang this spell. 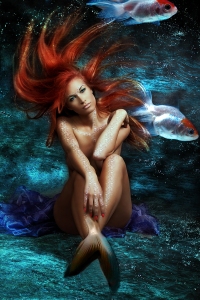 The wizard made her locks sway and swim to his whim.

Kadmeion lifted his hand and made a delicate swirling motion. The mermaid’s long hair lifted away from her face and mimicked the motion of the wizard’s hand.

He made her locks sway and swim to his whim. Kadmeion first twirled the long strands around her slim waist, and then spun them atop her head in a confectionary arrangement of braids and sparkling magical bits. By the time he finished the spell, the mermaid’s eyes glowed with pleasure.