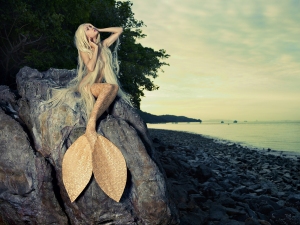 Welcome to the forest near Lita’s castle. Travelling wizards have camped here all night in their colorful carts and put on magic shows.

Dawn approaches, and morning birdsong surrounds us. We have time for one more wonder before we must break camp and go on our way.

A half-breed elf stands and tugs his immaculate magic worker’s tunic to rights. His azure eyes dazzle and he holds us breathless with a mere glance. This son of a prince whistles his spell, and the enchantment echoes as if we sit in the canyon lands and not the forest. We lean in to listen.

“How horrible and lovely mermaids be,” the elf-kind says. “Why do love-struck merfolk tear an unlucky wizard’s flesh from his very bones? And a mage’s promise is no small matter. When we mix it with a dragon’s enchantment and Lady Luck’s kiss, wizardry might even persuade Sir Death.”

A wizard finds out–the hard way–about mermaids’ affection when he faces a dangerous journey to Sir Death’s castle to win a powerful spell book for a love-starved dragon.

The elf begins his tale.

See the other magic shows:

A Minor Demon in a Mandrake Root

Enchantments dazzle in the forest near Lita’s castle–a place where wandering wizards pull up their colorful carts and put on magic shows.

An elderly dog jumps up on a stool. She is an unattractive mutt with faded brown spots and a drooling mouth.

But her clear eyes shimmer with magic. She taps her paw and conjures an image of another pup, a sleek and handsome wizard’s familiar with a wonderful trick.

“Minor demons animate mandrake roots in this wizard’s enchantment,” the old dog says. Her voice is a lovely alto and rich with marvels. “The flora looks like little people, and the plants walk and talk. Even the dogs can weave enchantments in this fantasy world, but the price is oh, so dear.”

This canine spell weaver shows us how a mandrake root digger dog flees his cruel master, befriends a wizard, and discovers his shapeshifting magic.

The dog begins her story.

Next time, a sorceress gives us a cautionary tale about Desire and a Spell Book.

Last time, a wizardling told us about Harsh Words and a Familiar.

See another magic show where a mage told us about a Dire Secret and a Dragonette. 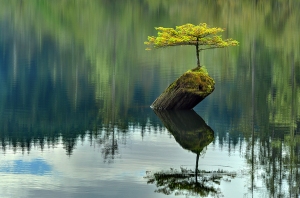 Harsh Words and a Familiar

We take another trip today into the forest near Lita’s castle–a place where wandering wizards pull up their colorful carts and put on magic shows.

A young magic man with eyes the hue of dirty sea water stands before the campfire.  He forgoes the traditional mage’s cowl and instead wears a starched formal shirt and tail coat. He clears his throat, then says:

“Watch your language in Lita’s forest.” He cups his hands. “Look in here. I’ll weave a stony path across dangerous waters to an islet with a marvelous bush. My story is about a lost familiar. And let me show you how a wizard’s harsh words turn into bats.”

This wandering wizard (the young mage tells us) sought a magical thingummy in his plate-shaped ocean world to free his kidnapped familiar.

The wizardling begins his story.

Next time, a talking dog warns us about Mandrakes and Minor Demons.

Last time, a mage told us about a Dire Secret and a Dragonette.

Dire Secret and a Dragonette

Welcome to the forest near Lita’s castle–a place where wandering wizards pull up their colorful carts and put on magic shows.

This is the first of a series of posts about the comings and goings of the folks at the ongoing magic faire outside of Lita’s castle. When dusk settles in, the mages gather and tell their stories around the campfire. They form images and sounds from the flames and smoke. Let’s pull up a stool and listen to the first tale:

“Glimpse dragons so tiny, they perch on their masters’ shoulders and coo like doves.  Discover a magician’s secret that threatens all he holds dear.”

This mage whispers a cautionary tale about a dragonette and an Enchanter’s battle to keep his shameful spells out of the wrong hands.

Read how this story begins.

Next time, a wizard tells his story about Harsh Words and a Familiar.