On Wizard Kadmeion’s airship, the forward sitting room has the best views and conversation. Lita invites Gentle Reader to join the chitchat with the characters in her upcoming story, Glitter Ponies.

The handsome wizard’s assistant takes a seat at a small table near the window. He begins tinkering with a small clockworks mechanism that collects dust bunnies under the machines in the airship’s gear room.

The half-elf Bright wears his glistening long blond hair unbound. He tucks a wandering strand behind an elegantly curved ear. He glances at us while he works. Effervescent elf magic glistens in the depths of his oh, so blue eyes.

Bright: Greetings to you, Madam Lita. Kadmeion told me about this new magic you call an interview. He says it is like using mind voice, but completely different.

A Wizard’s ~Twisty~ Magic is Something Like This, But Completely Different

B: Actually, it does. Wizards think that way. They have ~twisty~ magic.

LB: How did you do that? Put the squiggly things around the word “twisty”?

B: They teach wizard’s assistants how to do that at the Agatha University of Magical Arts and Sciences.

LB: My Gentle Reader friends have a question. What is the difference between a wizard’s assistant and an apprentice?

B: An assistant sees to the wizard’s mental stability, waters the plants, and keeps him from flattening our world’s plate and spilling the oceans over the rim.

A Glamour Spell Makes His Elf-Blue Eyes Look Like This

LB: That is a lot of responsibility. You manage it well. Kadmeion is fortunate to have you as his assistant.

[Lita’s Note: Sir Bright gives us a smile so charming that for a moment the air goes all soft and fuzzy like one of those pictures of an adorable kitten with beautiful blue eyes. Elf-kind mages call this Glamour.]

B: You flatter me needlessly. Plant care isn’t difficult.

[Lita’s Note: Bright is a smart aleck. They teach assistants that also at Agatha. Irrelevancy is the best way to snap a too-serious wizard out of a blue funk. Best to disregard the blather, and continue.]

Hazards of Keeping a Wizard’s Apprentice

LB: What does a wizard’s apprentice do?

B: Nothing, because wizards are not allowed apprentices. Wizards use to train wizardlings, but things got much worse than spilling the oceans.

LB: What is worse than spilling the oceans?

B: Frightening the rocks.

B: The last wizard with an apprentice became so vexed at the bumbling lad, that the wizard told his apprentice the answer to the Universal Riddle. Our plate-shaped world trembled so badly, the startled islands jumped out of the sea because they didn’t want to fall off the rim with the water. The islands forgot how to fall down. That’s why they now float.

LB: What is the Universal Riddle?

B: “Why is a raven like a writing desk?”

[Lita’s Note: Bright tenses, turns, and peers out the forward window. His shoulders relax, and he turns back to us.]

The Islands Forgot How to Fall Down

B: The islands here are still safe in the clouds. Do the rocks now float in your world?

LB: Only if you throw them. And they don’t float for long.

B: You and your Gentle Reader friends live in a strange place where things stay on the ground.

[Lita’s Note: No need to apologize for gravity. Bright could talk this magician’s blather all day. Let us move on.]

Best Part of Your Vacation?

LB: Let’s talk about your adventures in Glitter Ponies. What was the best part of your visit to Wuddlekins Island?

B: I enjoyed none of it. I could list the horrible parts here, but that would take the fun of discovery away for your Gentle Reader friends. 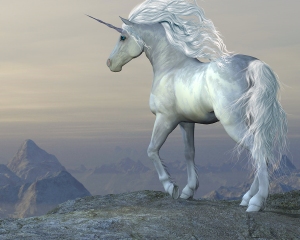 The Unicorns on Wuddlekins Island Were “Interesting”

LB: What about the unicorns?

B: All I will say is that they were interesting. That is not a compliment.

LB: There wasn’t anything you liked?

B: Well, one of Kadmeion’s wizard friends dropped by and we three did some ice gliding. But if you want to hear about who had a fun vacation, you should talk with Probability. Shall I send her in?

Other interesting places to go snooping: