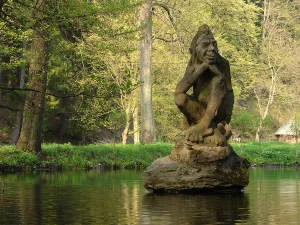 A Goblin Waits by the River

Namah, a young woman from the far side of the river, escapes an arranged marriage on her wedding day.  After a harrowing pre-dawn ride in a tipsy boat, she meets wonderful magician friends–one of them Namah’s older sister who was also a runaway bride. But trouble threatens Namah’s magic-filled life on this side of the river.

Count Anton receives a visit from a bureaucrat bearing the unwelcome news of a neighboring king claiming Anton’s lands. An invasion force will soon swarm up the river. Anton’s people are farmers and craftsmen, not soldiers. And the reclusive underground goblins refuse to help.  After years of hateful actions from Anton’s people, the goblins have good reasons for leaving the surface dwellers to their fate.

Invasion preparations swirl around Namah and her new friends. Along the way, a handsome young goblin named Ja’imos catches her eye, but they cannot be together for oh, so many silly reasons.

Without goblin fighters, even Namah and her young women friends must help however they can.  With the girls’ Amazon-like painted faces, archery skills, and the simple art of distraction, their unanticipated feints harry the invaders.  These king’s soldiers terrify Anton’s inexperienced fighters, but when the would-be conquerors draw blood from Anton’s long-time goblin friend Haghuf, the escalated war is more than Namah, Count Anton, and their unwelcome visitors could ever imagine. 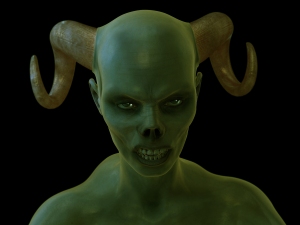 A Smiling Goblin–Nothing to Fear Here

Come of Age and Come to Terms With Me

Coming of age stories are a timeless delight, and Demoniac Dance delivers. Namah is a clever untrained magician, but she struggles with pubescent naïveté. This conflict gives Namah more depth than the usual clueless, but stubborn heroines found in YA fiction.

Count Anton is also a complex figure of a practical ruler who, ten years after marrying his Countess Ariane and producing a son, has fooled himself for the duration by saying he does not regret marrying the wrong woman. By the end of Demoniac Dance, we see his actions, thoughts, and heart align.

Ariane could have easily been the sad, put-upon woman who knew from the beginning that Anton loved another. Ariane surprises us with her response when Anton reveals his intentions. 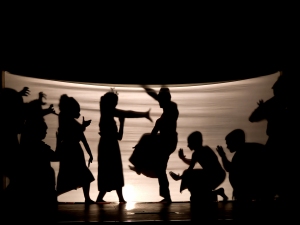 The Dance Creates Magical Fuel for Humans and Goblins

The enchantments in the Demoniac Dance world focus on the powerful and earthy pulse called The Dance. The surface-dwelling magicians and the goblins draw on it during group gatherings to create magical fuel for their spells.

But The Dance has a darker shade. Namah unwittingly gains an invitation to one of the goblin’s group dances. The sensual throb of The Dance raises grownup emotions that panics her into flight.

Ignorant of the dangers in the dark goblin tunnels, Namah runs directly to a deep pit, only for Ja’imos to snatch her away from death’s edge and hold her his strong arms. What passes between them is magic of a different sort, but worthy of the deep emotions of The Dance.

Demoniac Dance on Amazon US