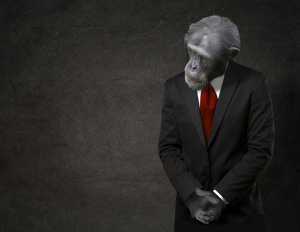 Those Clever Business Simians at WordPress.com Crunched the Numbers

The WordPress.com stats helper monkeys prepared a 2013 annual report for the “About the Fantasy Worlds of Lita Burke” blog.

The year 2013 draws to a close, and tonight it will be party time for Lita and many others. Let us first indulge in some sober reflection (apologies for the wicked pun) before we open the champagne.

How well did this marvelous airship of a blog transport Gentle Reader there and back again to Lita Burke’s elsewhere worlds? Which post was the most popular destination in 2013? It talked about how fiction writers go invisible in the real world. Who were the top four lovely people that referred others to the blog? The news thrilled Lita to find two new blog friends on this list of referrers. Here is an excerpt from the Lita Burke Blog Annual Report:

A New York City subway train holds 1,200 people. This blog was viewed about 4,100 times in 2013. If it were a NYC subway train, it would take about 3 trips to carry that many people.

Thank you for visiting in 2013, Gentle Reader. More journeys to Lita Burke’s fantasy worlds await you in 2014.

We shall have so much fun this coming year, hobnobbing with our fellow wizards and sneaking luscious cinnamon-chocolate-peppery spiced magical kisses from the Enchanters.

Be sure to get your seat on the airship for the next Clockpunk Wizard story Glitter Ponies early in 2014. A little later in the year, we will return to the Enchanters of Sye world with Ghost Orchid. 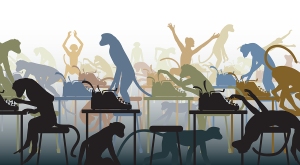 1000 Monkeys at 1000 Typewriters for 1000 Years–They Might Write Shakespeare, but Still Wouldn’t Have as Much Fun as the Simians in Old Bony Blue Eyes

Those adorable, clever simians! Lita is a monkey’s auntie over the commotion about Old Bony.

Take a look at what Chris The Story Reading Ape’s New (to me) Authors Blog has to say in a promo about Lita’s Old Bony Blue Eyes. Grab a handy vine and swing over for other fun articles on the Ape’s homepage.

The fantasy world of Clockpunk Wizard in Old Bony Blue Eyes features wizards who summon minor demons to animate homunculi. Kadmeion and his assistant Sir Bright specialize in clockwork automata, but they have peers who create homunculi from plants–such as mandrake roots–and (shudder) animal bodies. Lita has already explained Kadmeion and Bright’s brand of wizardry elsewhere.

Which Wizard on Sir Death’s Island Would Create a Monkey Homunculus?

Could a wizard use erstwhile monkeys for automata? Well, yes. Which wizard on Sir Death’s island would do such a horrible thing? The answer might surprise Gentle Reader. Check out Kadmeion’s visit with Sir Death in Old Bony Blue Eyes to discover which wizard would do such monkey business.

In a fantasy world stuffed with the technology of Leonardo da Vinci, Kadmeion’s home is an airship powered by wind and wizardry, and has Copernicus, a clockworks homunculus, as its pilot. Humans and automata work in the topside rigging on airships.

Bright worked as a rig monkey while attending Agatha University. He finds rope-swinging skills critical in saving his friends in Old Bony, but there is something fishy about the circumstances. Lita will not say anymore–she mustn’t spoil the surprise.

After reading The Story Reading Ape’s promo about Old Bony, if Gentle Reader is curious for more Lita Burke gossip, then take a look at the News Releases page.