The Book of the Dead explains the nature of Church magic in the Enchanters of Sye world.

Sciomancers Perform Ritualistic Spells to Maintain the Ghosts in the Catacombs

Catacombs are underground hallways, alcoves, and tunnels beneath Church buildings that house receptacles for ghost relics.

To build a catacomb, three Priests combine their magical power and draw on the pooled enchantments of an above ground Church building. The town’s Priest tends the structure spells afterwards.

Sciomancers furnish the catacomb hallways and alcoves with candle niches, metal name markers, and locked drawers to hold ghost relics. They support a favorable ghost environment by tending the upkeep of the catacombs, performing ritualistic spells, and lighting candles to warm the spirits.

Visitors Leave Dishes of Magic-rippling Water For the Ghosts

Church followers visit the catacombs, leave small remembrances in the niches, and recite spells to encourage the ghosts to stay in the corporeal realm instead of journeying to the Fields of Yalu.

The gifts are usually flowers or plants, dishes of magic-rippling water, or tiny wind chimes on a stand that have a small spell to make the bells sound.

Read more about ghost amulets, the Book of the Dead, and how ghosts help a magical charms maker hide a dangerous spell book in these Enchanters of Sye stories:

The Dramatis Personæ is the roster of conjurers and sentient magical creatures staying in the many rooms, grottos, and byways of Lita’s castle. Here is the guest book for the Enchanters of Sye Tower. 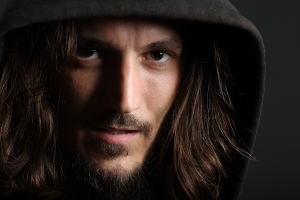 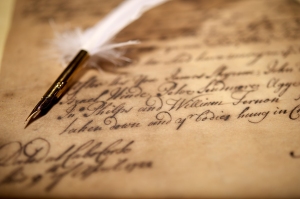 Sumer Penned Beautiful Copies of the Book of the Dead

Sumernor’mylnburne was a Church Sciomancer magician in the seaside town of Isor over one hundred fifty years ago. Known for his talent with calligraphy, he produced beautiful custom copies of the Church’s Book of the Dead. He was also a natural seer of ghosts. Sumer counseled the confused ghosts of the recent dead to finding their way to the Fields of Yalu.

A flirtatious woman compromised his magic by marrying him so she could learn his private name on their wedding night. She used his powerful magic to steal money from the Church, and then fled Isor and her hasty marriage. 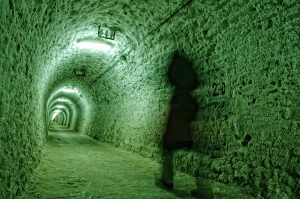 A Resident Ghost in the Old Church Catacombs at Isor

Sumer faced expulsion and a life of shame. He petitioned the local Isor Enchanter School for intervention. The Enchanters agreed to help. Grandmaster Sahn gave him a new private name so Sumernor’mylnburne could return to sanctioned Sciomancy. The Church annulled his marriage, and the Sciomancer never remarried.

The deep wasting sickness claimed Sumer in his seventieth year. At his request, he underwent the preparation for ghostly interment. Upon his death, Sumernor’mylnburne became a resident ghost in the Old Church catacombs at Isor. Because of the skillful magic of his fellow Sciomancers, Sumer was a biddable ghost. He willingly answered summons from Church and Enchanter magicians and had remarkable mental skills for the incorporeal. Two generations of Isor Sciomancers tended his relic cache in the catacombs, and Sumernor’mylnburne flourished as a land-bound ghost.

Sumer Left for His Final Home in the Fields of Yalu

A mad miscreant attacked the Isor catacombs and  disturbed many of the ghosts’ caches. Among others, she destroyed the relic that kept Sumer tethered to the earthly realm.

The Isor Sciomancers were unable to restore Sumer’s relic. As per protocol, the local Church erected a proper tomb in the Old Burial Yard, placed what remained of Sumer inside, and performed the rites to send for his ghost. Sumernor’mylnburne responded this last time, conversed a while with his former colleagues, and then left for his last home in the Fields of Yalu.

Visit some more with Ghost Sumernor’mylnburne in these Enchanter of Sye stories:

Terms of Surrender by Lorrie Farrelly is a historical western romance about a former captain in the confederate army, Michael Cantrell, and his search for redemption in the ranch lands of Wyoming.

In the months following the American Civil War, the battlefield horrors have broken Michael’s spirit. He saw his beloved brother Gavin fall, and heartache consumes Michael. With nothing left of his life except for his warhorse Jet, a saber, and an army issue Colt Navy revolver, he rides Jet to the western frontier.

Annie Devlin has overwhelming cares for such a young horse rancher. Her parents are dead and she struggles to make a home for ten-year-old brother Robbie. Annie’s powerful neighbor Elias Randolph covets her family’s pastureland, and he pulls dirty and deadly tricks to get her to sell.

Fate brings Michael to the siblings’ rescue when Randolph’s henchmen attack the two on their way home with a mud-stuck wagon of supplies. Michael wins this skirmish, but is near-fatally wounded.

Annie takes Michael home and tends the fallen confederate captain. Bringing him back from death’s gate is just the first of their harrowing adventures to protect the ranch.

Love blossoms between the northern woman and southern man, but the War Between the States is not over for some. Despite advice from Gavin’s ghost, the cards are stacked against Michael finding redemption and love in the Wild West.

Terms of Surrender is a tender love story about a couple in a harsh world. The tale unwinds through Michael’s eyes, and at times his anguish brought Lita tears. The romance was sexy and delightful, and the bad guys were ooh, so despicable. The scene descriptions were vivid and done well. At times Lita shivered from the chilly kiss of the Wyoming wind.

Gentle Readers who enjoy westerns and spicier romances would like the story. For others who love immersive worlds, just saddle up and ride on in to Terms of Surrender.

The Bestiarum Vocabulum is the wizard’s encyclopedia of faerie beasties and mundane crossovers living in the lake and forest near Lita’s castle.

Gentle Reader travels to the Enchanters of Sye world today. We stop by the Old Burial Yard in the northeast side of Isor Town and visit one of the Church’s offices–the magical custodians of Sye’s ghosts. 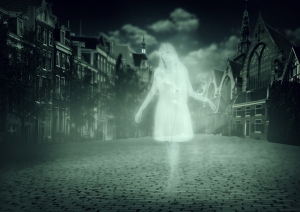 The Church’s specialty magicians for crypt and ghost spells are Sciomancers. They call ghosts at will, bind the spirits to prepared niches in the Church’s catacombs, or hold them in (unapproved by His Divine) bewitched ghost amulets. Another Sciomancer responsibility is transcribing copies of the Book of the Dead–it contains poems, songs, and advice for Sye’s living residents. It is also a handbook for the restless ghosts in the Fields of Yalu.

Stories from the Enchanters of Sye fantasy world:

Lita takes Gentle Reader on a cemetery tour in the Enchanters of Sye world today. Ghosts walk in Sye, and specialty magicians called Sciomancers weave spells to lure, house, and speak with the specters.

Although the Church’s head magician, His Divine, banned the practice, a talented Sciomancer can call a spirit from the Fields of Yalu and trap it in a Ghost Amulet. Constructing elaborate amulets is a popular spell craft with Magic Guild workers.

Avid amulet makers create fanciful non-inhabited ghostly abodes with dozens of elaborate rooms inside. Hobnobbing with ghosts is risky. An amulet keeper must not wear an occupied amulet near the heart, or risk madness caused by the ghost.

Stories from the Enchanters of Sye fantasy world:

Ghosts are frequent visitors to the Enchanters of Sye world in Tredan’s Bane and Wrath. Only Enchanters, Sciomancers, and people wearing Ghost Amulets can see and interact with Sye’s ghosts.

A ghost appears solid and wears similar clothes to when it was a live person, but empty eyes show it as a wandering spirit.  Ghosts have gaps in their memories, and it’s difficult for them to learn new tasks.  They have intellect instead of emotions, so an empath cannot sense their feelings in the usual way.  A Sciomancer can bewitch a ghost to tell secrets from its life, and also make it report the ghost’s conversations with others. 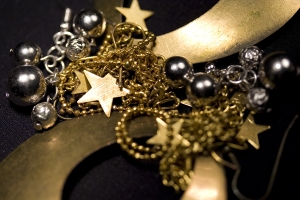 Although the Church’s head magician, His Divine, banned the practice, a talented Sciomancer can call a specific ghost and compel it to stay inside a Ghost Amulet.  Constructing elaborate amulets is a popular magic craft with Magic Guild workers; avid amulet makers hold competitions to display their non-inhabited Ghost Amulets containing dozens of elaborate rooms.

Inhabited Ghost Amulets are dangerous.  An amulet keeper must not wear the occupied amulet near the heart, or the keeper risks madness induced by the resident ghost.

Most Sye residents do not have the native magical talent to see and converse with ghosts.  Church magicians, especially Priests and senior Sciomancers, construct charms to allow the wearer to interact with ghosts. The typical spells in a Ghost Charm include calling and banishing a ghost by name, plus the ability to see and talk with the ghost.  The better-made Ghost Charms have a Glamour Spell that will attract nearby ghosts to the charm’s wearer.