Turn up the lights and roll the cameras. In Lita Burke’s newest video, the author confesses to creating the Clockpunk Wizard world, telling the story inside of Old Bony Blue Eyes, and much more.

Lita describes these three genres’ telltale clues that anyone can spot. She has pictures on them, and shows us.

There are more, almost naughty, details. Oh, the scandal when these three genres became a ménage à trois known as her Clockpunk Wizard world. Then there is that Old Bony Blue Eyes affair. Lita blushes, but tells us all about it.

For the crack investigators among you Gentle Readers, here are more clues about Old Bony Blue Eyes. It all starts with the book cover that has the verified picture of the charming wizard they call Sir Death. That part isn’t so bad.

What is much more incriminating is that the book cover comes with that suspicious, oh so brief spell that writers call The Pithy Sentence. Lita shows the cover and the pithy below. Wait, this next part is so sneaky. On the flip side of the book is more evidence in the back cover blurb.

A wizard faces a dangerous journey to Sir Death’s castle to win a powerful spell book for a love-starved dragon.

Chapter 1 (Yes! Inside is actual proof about Clockpunk Wizardry.)

Old Bony Blue Eyes on Amazon US (So this is how Clockpunk Wizardry is spreading like a bad rash in fantasy circles.)

Interviewers have a knack for getting Lita to confess all sorts of things. Here is more tittle-tattle about Clockpunk Wizardry.

In a recent interview, Lita chatted with the folks over at Authors’ Cave. After an exhaustive interrogation that required a pound of fine chocolates for medicinal purposes, out came the truth. The details may surprise Gentle Reader, or for the skeptics, it might sound like the usual fantasy worlds claptrap. You decide.

Yes, Girls Can Be Wizards Too

This scandal started decades ago when Lita wrote her first fantasy story and shared her masterpiece with family and friends. Oh, how they wrinkled their noses when the young heroine, who Lita called a wizard, helped a lost dragon find his way home.

These affectionate critics shouted that girls couldn’t be wizards. Witches, perhaps, or enchantresses. Sorceresses. “The whole concept was silly,” they said. Lita explains in the Authors’ Cave November 2014 eZine how she fixed that sorry state of affairs.

Shocking Proof About the Half-Boy Half-Dog

Much of this chocolate-laced interview had to do with Clockpunk Wizardry. It was time for Lita to come clean about the mysterious case of the half-boy half-dog cynanthrope.

At first, Lita shrugged and tried to gloss over the specifics. “Anything can happen in fantasy worlds,” she said. Further questions brought out the truth.

The Authors’ Cave eZine for November 2014 has the first chapter proof concerning the boy/dog story. Lita describes the outrage of young science geeks writing made-up stories. Also learn about the surprising dangers of gardening mandrake roots, and why you should keep your pets far away. 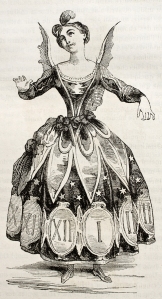 Lita Burke Gets All Dressed Up in Her Clockpunk Dress

Lita has been away from the microphone for a while. It’s time for Lita to dress her best and talk about Clockpunk and Fantasy.

Swing over to JeriWB’s blog and get the scoop in her latest post Author Interview: Lita Burke.

Find out all sorts of curious things about Lita’s writing life:

Lita has spilled the beans before. Check out her chats with the folks at Smashwords and Bookmark Reviews. The latest, of course, is at JeriWB’s blog.